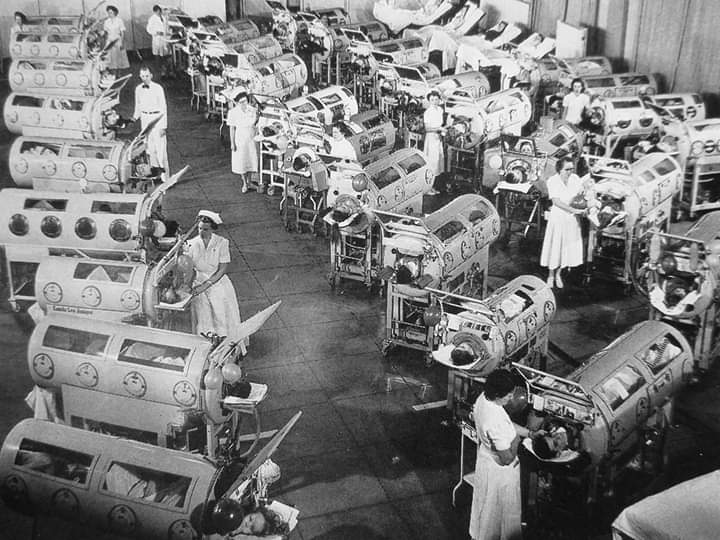 I suppose some of the younger generations would no longer know what an Iron Lung actually is. You can see a picture here of the type of iron lung I stayed in. In short, an iron lung is a machine that allows people to breath once they are no longer able to naturally. They are most commonly associated with the Polio epidemic of the 1950’s.

I vaguely remember getting sick when I was 11 years old. The year was 1952. None of us thought it was anything serious at first. I had a fever, achy joints, felt nauseous. It didn’t seem like a big deal. But then it started getting worse. I remember complaining to my mother that my reflexes were getting dull and I was slowly losing feeling on the left side of my body. We went to the hospital and I was diagnosed with paralytic polio. The hospital tried a few different tests and medications, but none of them worked. It started becoming difficult for me to breath, as some of the muscle groups in my chest had become paralyzed.

And this is when a doctor first told us about the iron lung. I had never heard of one but my parents both looked concerned when the doctor spoke of it. I was told that my body could most likely fight off the disease in a few weeks, but I would need a machine to help me breath during that time.

I remember when I was first brought to the iron lung. How strange and unnatural it looked. A little boys head was sticking out of the compartment right beside mine. I was told his name was Jason. I said hello to him, but he ignored me outright. A series of mechanical sounds were coming from the inside of his iron lung. It was the sound of some futuristic robot inhaling and exhaling. It was loud. It sounded painful. It looked like a monster. I feared that it would rip me apart.

The doctor opened up my iron lung, put me on a stretcher (I called it the “cookie tray”), and slid me in. About fifteen minutes later it was all ready to go. I would barely leave over the next 4 weeks.

I still don’t fully understand how the iron lung worked. Something to do with a motor powered vacuum that would suck the air out of one side and blow it in the other, simulating breathing. What I do know is how difficult it was for us patients. The breathing was out of my control, so I never got used to it. I could only talk on the exhale which made it frustrating for myself and anyone trying to converse with me. Another problem was eating. I had to time precisely when I would swallow my food because the inhale cycle of the machine would draw the food into my lungs, causing me to choke. And when you’re choking but can’t control your breathing… well, that’s a whole other mess.

What I remember most about my time in the iron lung was the boredom. My parents would come and read to me sometimes, and some of the nurses were nice and would chat with us. But Jason, beside me, still never spoke. Not in the day time at least…

Night time is almost completely pitch dark in the hospital room. One night, after I’d been in the iron lung for about a week, I awoke and looked over at Jason. He was staring at me. He had never even looked in my direction before. Had never had a guest visit. Had never yet uttered a word. But here he was. Staring at me.

“Uh, hello I Jason.” I said to him. He kept staring. He barely looked like himself. Almost as though he was possessed.

“We’re not supposed to be alive” he told me. “These machines aren’t natural.”

But he didn’t respond. He rolled over. He went back to sleep. I tried to just move past it. To try and continue coping.

Another problem in my iron lung that I recall was cleaning the human waste. They had to pull me out on the cookie tray twice a day. They would clean the inside and change my clothes. This was always excruciating. I couldn’t breathe at all during this process. They would set a timer at 1 minute and 30 seconds. When that alarm went off, they would have to slide me back in as quickly as possible. But waiting unable to speak, move, or breath for a full minute and a half was torturous. And they always seemed to take their time, chatting away… while I lay motionless, suffocating.

On one of those cleanings, I looked over and saw Jason staring at me again. He looked expressionless. The nurses finished up, left, and turned off the lights for the night. It was again almost pitch black. His shadowy outline barely resembled him when he spoke. “It’s going to rip me apart. Devour me. I can feel it licking me. Salivating. It’s almost ready.”

I thought his whole ordeal had driven him mad, but I heard the terror in his voice. I tried to comfort him as best I could. He just rolled over and went back to sleep.

I woke the next morning to screaming.

“IT’S BITING ME!” Jason bellowed. Three nurses and a doctor came running in.

“What’s the problem?” They asked. “Is it pinching you? Can you still breath?”

Jason looked around the room in hysteria. “It’s taken my feet.” He was now speaking quietly. “Pull me out. Get me out.” A doctor started trying to pull out the ‘cookie tray’. “It won’t budge.” He said. “I’ll need some help.”

Jason started screaming again. “GET ME OUT!”

I now saw blood start to gather around his upper abdomen and in his mouth.

A doctor and a series of nurses had grabbed on and started pulling. They had gotten him out a few inches. His shoulders were out now. Completely covered in blood. Jason did one last bellowing scream before passing out. Maybe he was already dead at that point. The doctor and nurses all yelled together “One, two, THREE.” And they yanked as hard as they could.

Jason was fully pulled out. Up to his belly button anyways. Everything below that was still in the iron lung. His stomach was covered in massive bite marks. From a “mouth” at least twice the size of a humans. There was so much blood. So much hysteria.

And then I started to feel something licking my legs from inside my iron lung. I let out a quiet “Get me out” before I fainted.

When I came to I was in a hospital bed. Breathing all by myself. A doctor looked at me. “You’re all better now. 25 days in that iron lung and now you’re all good to go.” He smiled.

“We’re not going to talk about Jason.” The doctor replied.

Another man beside him, maybe a lawyer, spoke up. “There’s nothing to talk about with Jason. The iron lung was ineffective for him and couldn’t cure him. He’s no longer with us.”

“Know when to shut your mouth boy. You really believe anybody is going to believe what you saw? Just shut your damn mouth. Jason died naturally, in the iron lung.”

I did shut my mouth. This right now is the first I’ve ever written or spoken of what happened.

I’m not sure what exactly occurred. Did the machine malfunction and rip him apart? Or was Jason right? Did it eat him? And that lick. Something licked me. I’m certain of it.

Being that I was 11 years old in 1952, you can probably figure out my age. I don’t have much time left and am writing this in a hospital.

Maybe this is just nonsensical rambling from a dying man… but I still sometimes think I was supposed to die back then. In 1952. Before the information age. When the world had almost three time less people. Before the oceans were ridden in dead zones. Before the ice caps were melting. Before we’d pillaged the earth of most of its resources in order to meet ever growing global populations.

Vaccinations, antibiotics, antivirals, iron lungs… maybe they really are all monsters trying to devour us. Maybe they helped individuals in the short term, but will inevitably lead to our demise. 7.5 billion of us. We all die. Eventually. Sometimes far later in life than was natural. Far later. I was supposed to die in 1952. With Jason.

And sometimes I think… maybe Jason was the lucky one.